This article describes an effective method to transfer ZX Spectrum programs from cassette tape to a computer and  convert those files for storage in the TZX file format. 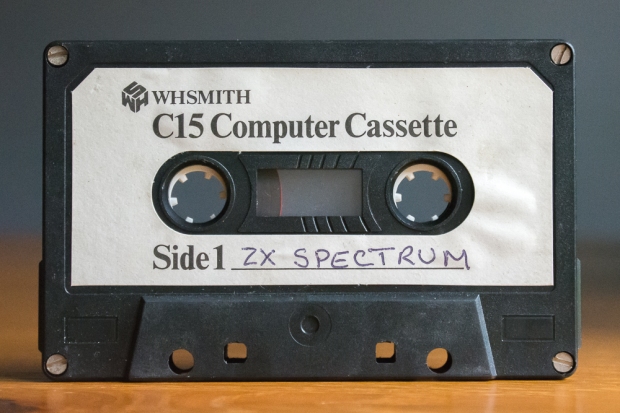 Once preserved as TZX files, ZX Spectrum programs can be enjoyed on modern hardware capable of running ZX Spectrum emulators.

This file transfer and conversion guide is based on a PC running Windows 10 in conjunction with the MakeTZX decoding engine by Ramsoft.

It records the steps I took to salvage all of my ZX Spectrum BASIC programs from tape that I wrote in the early eighties.

Hopefully, in following this guide, you should avoid the stumbling blocks I encountered and save yourself a lot of wasted time.

You are advised to read through this document in full before commencing in order to understand the process and gather the materials you need.

Enjoy this archiving process and looking through your old code!

1. What You Will Need To Transfer ZX Spectrum Programs From Cassette Tape To Your Computer And Convert Them To The TZX File Format

Your cassette tape may be more than three decades old if it has had the good fortune of surviving from the early eighties. Certainly, you need to treat it with care as it is unlikely that you will have the data it contains  backed up on another tape.

Assess the condition of the cassette and the tape itself by inserting a pen into one of the spools and rotating it in the direction of normal tape transport. Repeat the process with the pen in the second spool to transport the tape in the opposite direction. Before proceeding, look for loops of tape that may have been thrown off the wound spools during storage.

Ensure the tape is wound properly on both spools before inserting it into a cassette tape player.

Turning a Cassette Tape Spool With A Pen

With the cassette inserted in a cassette tape player, fast forward the tape fully to one end, then rewind the tape completely.

I found this to be the largest obstacle in achieving reliable data transfer from tape to computer. Why? 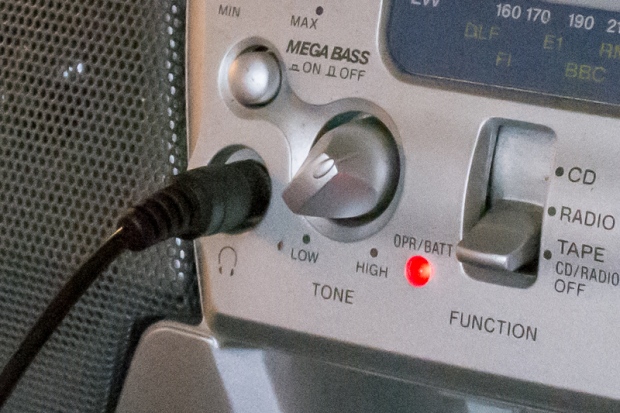 1.3 Identify The Line-In Connection Of Your Computer

Line-In connections are normally labelled on your computer and are therefore relatively easy to identify. Examine your computer / motherboard manual if you are unsure of the location.

1.4 Connect The Cassette Deck To Your Computer

Using a suitable cable, connect your cassette tape player to the Line-In connection of your computer. 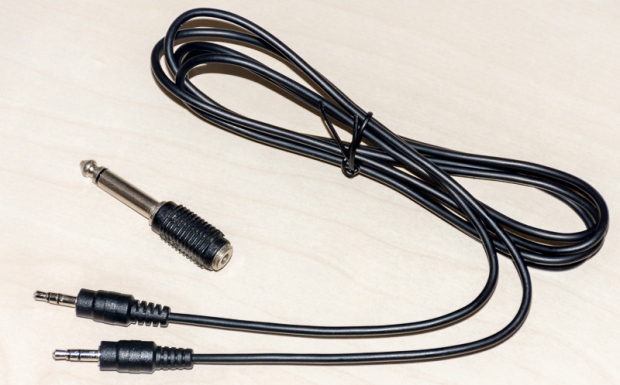 It is best to connect to an amplified output of the cassette deck so that signal levels can be adjusted with the volume control prior to data transfer. The headphone socket is usually a good choice. 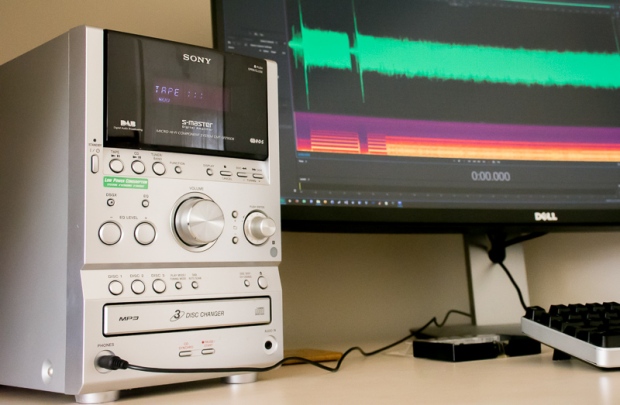 You may require phone jack adapters or a cable with specific jacks to enable the connection.

Visit Romsoft’s MakeTZX Homepage and download the appropriate software for your system.

Versions of MakeTZX are available for Windows, DOS, Linux x86 and Amiga from the MakeTZX Download Center.

If you have a Windows operating system, download the two compressed files, MakeTZX and WinGUI.

Uncompress both zip files. This will result in two separate folders. Then, move / copy the contents of one folder to the other so that all the following files are contained in one folder.

Merge The Contents of Both Folders | MakeTKZ Windows

Make a note of the folder’s name or rename the folder if you prefer. This will be your working folder. This software requires no installation and can be run directly from this folder.

The file mtzxwgui.exe is a Windows graphical user interface designed to simplify configuration of the DOS-based sampler and TZX encoder, maketzx.exe

The file mtzxman.htm is the user manual for MakeTZX and can be viewed in your default web browser by double-clicking it.

Although not essential, it is beneficial to have an audio / wave editor installed on your computer to assist with signal analysis, fault finding and editing.

Audacity is free, open source, cross platform software for recording and editing sounds. Audacity will run on Windows, Linux, Mac and other operating systems. It is highly recommended.

There are many, free ZX Spectrum emulators available for all types of hardware and operating systems.

Alternatively, use your favorite ZX Spectrum emulator. Just make sure that it is able to load TZX files.

2. How To Use MakeTZX To Transfer ZX Spectrum Files From Cassette Tape To Your Computer And Convert Them To TZX Files

The help file, mtzxman.htm,  as described in Step 1.5, is comprehensive and explains everything you need to know about MakeTZX. You may need to refer to this document if the conversion process fails at some point.

Enter a name for your Output file (TZX), i.e. OUTPUT.

DirectMode means that MakeTZX will use the Line Input of your sound card to capture and convert the input signal in real time.

Press the Start button. This will launch maketzx.exe in a console window with the configuration set in the GUI.

Upon launch, you are invited to set the input signal level from the cassette tape player to an appropriate level; a level high enough to have a good signal to noise ratio but not so high that signal clipping (distortion) occurs. Press Play on your cassette tape player and you should start to see the signal strength of the recording displayed dynamically on the text-based vu-meters.

Adjust the volume of the cassette tape player so that the signal strength is high but does not exceed the text Volume] within the vu-meter.  Signal strength greater than this will result in clipping and is detrimental to data transfer.

Once you are satisfied with the signal levels, Stop and Rewind the tape.

With the console window selected, press Return to start the sampling and conversion. Now press Play on the cassette tape player.

The output in the console window should look something like this:

At this point it is worth noting down these details by either copying the text in the console window to a text file or by capturing the console output as an image for reference later.

Notice that two files have been generated in your working folder; one is an uncompressed audio recording of the playback  (.wav file) and the other is a .tzx file.

Opting to save a digitized audio file is beneficial in removing any encountered errors without the need to re-sample from the cassette tape again. Details are provided towards the end of this document in section 2.5.

TZX files store programs and data in the same sequential order that they were stored on cassette tape.

If no association exists, open your ZX Spectrum emulator, File > Open > your.tzx will load and run the first program in the sequence of programs.

If you want to load a program other than the first, open your ZX Spectrum emulator and go to Media > Tape > Open

LOAD “Your Program Name“ and the flashing L cursor.

Press Return to load your program.

2.4 One TZX File For One Program

If you would prefer to make a TZX file for just program, this can be achieved by either:

I found the latter to be the easiest and fastest method as it is time consuming to position the cassette tape accurately to sample a program mid-tape. 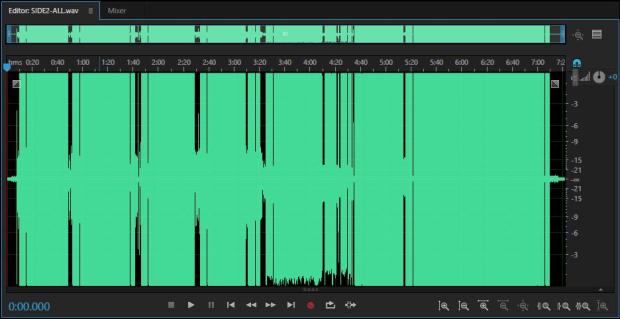 Using the output that you saved  earlier from the maketzx console window, you should be able to determine where your program resides in the wave form, based on the gaps between data blocks.

Highlight the section of the wave form that you wish to save and File > Save Selection As… to save an audio file of your selected program.

Alternatively, rename your file then delete portions of the wave form you don’t need until you are left with your program data.

Tip! Remember that a header precedes any program or data block and all associated data needs to be saved. The example below depicts two ZX Spectrum programs as audio waves. The top trace consists of a program header, which contains the name of the program. It is then followed by the program itself. This is a typical example of a simple ZX Spectrum BASIC program.

The bottom trace is one program but is more complex than the previous example as it consists of many data blocks and headers:-

All of these need to be selected to produce a working TZX file.

Launch the MakeTZX Win GUI and press the Browse button. Choose the modified audio file that you wish to convert. Ensure DirectMode is Disabled and click Start.

MakeTZX will then convert your audio file to a TZX file and output the details in the console window.

MakeTZX | One Program One TZX File

Test the generated TZX file by double clicking it or by loading it as tape media in your ZX Spectrum emulator.

MakeTZX incorporates an arsenal of powerful digital filters that are able to rectify many of the problems found on old tapes. The filters are explained in detail in section 11 of the user manual.

If you encounter a R Tape loading error, 0:1, load the wave file into MakeTZX WinGUI and enable the Digital Filter with the default settings. Ensure DirectMode is disabled then press Start to generate a new TZX file.

Refer to the accompanying documentation to determine what digital filters could work for your situation.

Also note that if you are attempting to transfer and convert a commercial game with this method, check Autodetect loader to circumvent the multitude of protection schemes that were used to prevent piracy.

If all else fails, re-sample the cassette tape recording with a different output level.